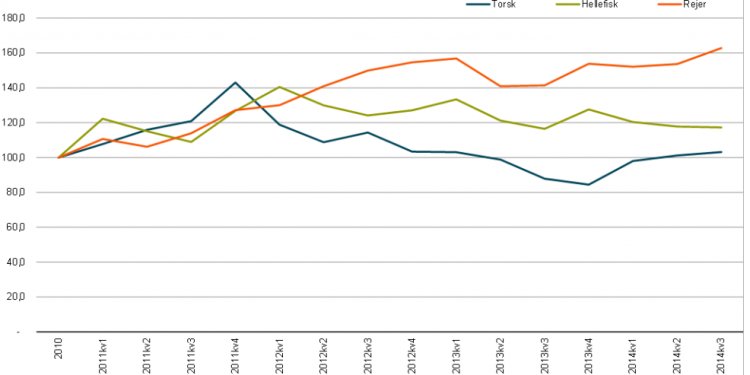 US Pacific headed and gutted (H&G) cod prices have started to recover following a period of decreasing prices during the first quarter of this year, with some sources expecting price changes again as B season gets started at the end of this week.

In January Undercurrent News reported that already softening H&G prices were expected to continue decreasing with sales slowing down in both Japan and Europe. At that time sources cited prices between $3, 550 per metric ton and $3, 600/t, a drop from the same period in 2015.

One source, who wished to remain unnamed (source A), said that earlier this year his company was selling medium-sized, longline-caught cod to Japan for "as low as $3, 350/t".

Keith Singleton, president of the value added division of Alaskan Leader, also said the direction of prices has "completely changed".

"It's taken a nice turn...it's a strong market, " he said. "For our company, and I'm hearing from other companies as well, there's a very diverse group of buyers that are looking into Alaska for retail as well as food service."

Singleton said prices for Pacific cod premium longline frozen fillets sold wholesale stand roughly in the mid- to upper-$4 per pound range, going as high as $5/lb, whereas a few months ago prices had dipped to about a dollar less.

Another source who wished to remain unnamed (source B) said that overall, prices are up about 20%.

Sources attributed the rise in price to the strong domestic market for cod. According to Singleton, there is a rising demand among consumers to eat more US-sourced seafood.

"I think we're seeing a lot more awareness about the red white and blue, " he said. "The key is wild, you can't say wild loud enough, wild and sustainable, it's very important."

Source B also said he has been seeing very strong domestic demand.

"We're selling more fresh cod than we've sold in the last few years, I think this is our strongest year, " he said. He attributed this to the consistently high price of halibut, which has pressured consumers to switch to a less expensive fish.

"The domestic market is solid [partially because] people are starting to realize that the halibut price is never going to go down, " he said.

Source A also noted a growing potential market in several European countries to replacing Norway's fresh product, as the country stopped producing at the end of April.

"Norwegians are selling everything they're producing fresh, very little is frozen or salted right now, " he said. "When the Norwegians quit production at the end of April...you have all these people that want to consume this product. What do you do? You buy longline frozen at sea cod out of Alaska, you refresh it and put it in the chilled market."

Source A said this has been going "extremely well" and expects growth in that market.

Sources gave different predictions for how pricing would shift as B season, which begins on June 10, gets underway.

"I'd say that going into B season, traditionally fishing is slower, " said source A, "so I'm guessing prices are going to slowly rise during the summer. I think a lot of it depends on currency."

Source B, however, said he thinks prices will go down a bit once B season starts, as companies will be focused on selling off their fish to make room for the new product.

"I think we're about five to six weeks out before the prices start to go down, " he said. "[a new season] can sometimes drive the price down, unless there's not much product left, but usually the start of a new season is a signal to get rid of your old stuff."